What follows is an oral history interview with Charlie Gibson, a Vietnam swift boat veteran who served in the same era as former Senator John Kerry of Massachusetts. Most Americans never heard of Swift Boats until the 2004 Presidential election and the attendant controversy regarding Senator Kerry’s Vietnam service. Since then, the term “swiftboating” has entered the political lexicon as a pejorative. Yet, most Americans still know very little about the Patrol Craft Fast (PCF) and the role it played in the conflict. As a veteran who served in a combat capacity in this little-known arena during the Vietnam War, Charlie has a story to tell that could at least partially redress the dearth of real information about Swift Boat service at the time, disentangled from the later politics that for a time overshadowed it.

This oral history was conducted in 2014. The  five part audio interview, the complete transcript and the interview release form are accessible through the links below: 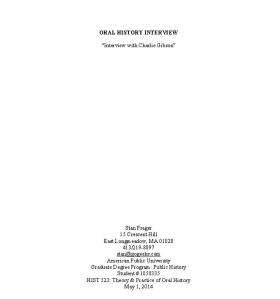