I spearheaded a digital archiving project in 2014 at the archives of the Lyman & Merrie Wood Museum of Springfield History, in Springfield, Massachusetts, that digitized a trove of recently rediscovered Civil War primary sources . A grant was awarded by the Massachusetts Sesquicentennial Commission of the American Civil War to digitize the diaries, correspondence and memoirs of the Massachusetts 31st Infantry,  which served with the notorious Massachusetts political General Benjamin Butler as the occupying force in New Orleans after its fall to Union forces in the early part of the Civil War. More than a century ago, the regimental historian collected materials for a projected regimental history  that never came to fruition, and these documents have sat in the archive forgotten and unexplored ever since. I served a central role digitizing these materials using Optical Character Recognition (OCR) technology to generate searchable text which was then uploaded to the web for public access. I also selected the equipment and software that was utilized in this regard. My essay, “Behind the Scenes: Digital Archiving,” was published on the website created for this project.  There is a lot more information and links to this project here: 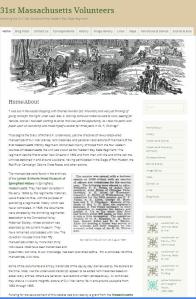 I wrote an essay on digital archiving and this project,  published on the website here: 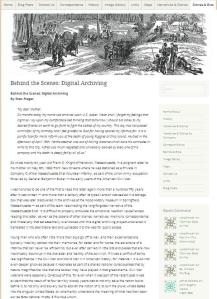 Behind the Scenes: Digital Archiving

And is reproduced in its entirety below:

Behind the Scenes: Digital Archiving

“My dear Mother:
Six months today my name was enrolled upon U.S. paper. Never shall I forget my feelings that night as I lay upon my comfortable bed thinking that tomorrow I should bid adieu to my dearest friends on earth to go forth to fight the battles of my country. This day has not passed unmindful of my birthday and I feel grateful to God for having spared my life thus far. It is a painful task for me to inform you of the death of young Ruggles at Ship Island. He died in the afternoon of April 16th. Yet the steamer was out of hailing distance which bore his com¬rades in Arms to this City, Alfred was much respected and uni¬versally beloved by every one of his company and his death is deeply felt by all of us.”

MassLive also featured an article on the project at: